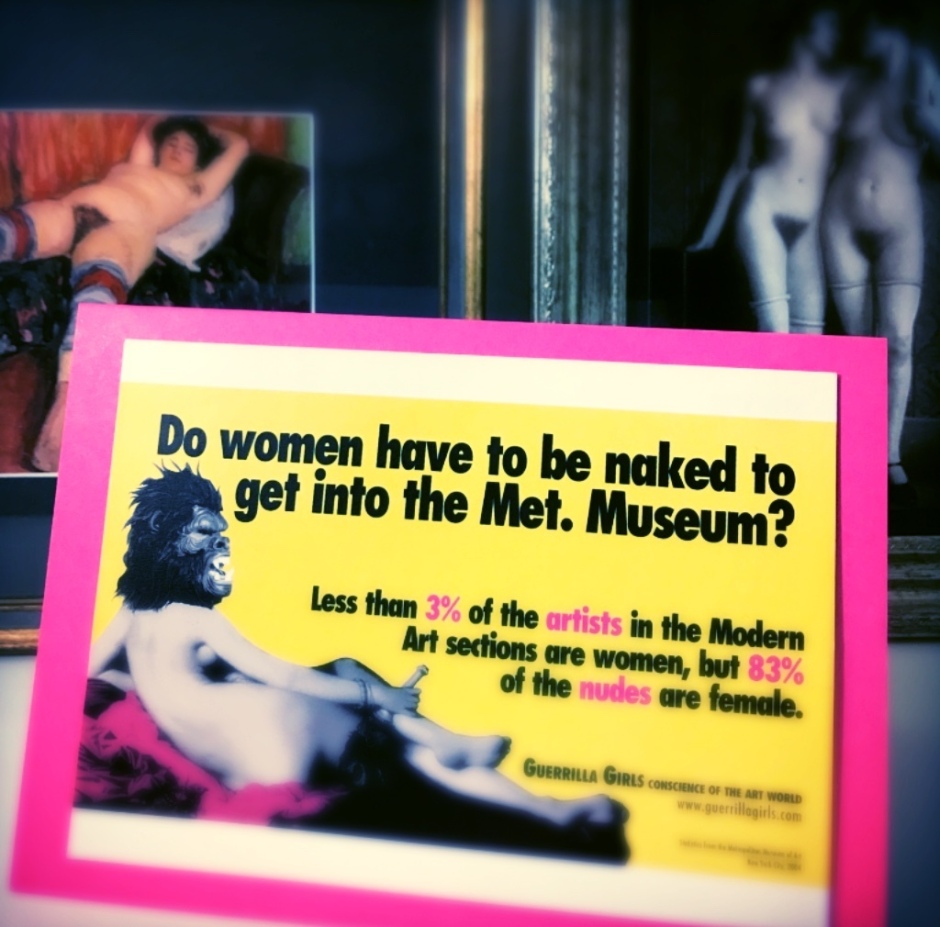 Do women have to be naked to get into the Met. Museum? I got the postcard in Paris ages ago at Guerrilla Girls exhibition, and it has been part of the changing display of things on my office wall ever since. I thought its message was kind of a quaint reminder of a bygone era, but what did I know.

Almost every day I read that somebody from the world of show-business is sorry and apologetic (Weinstein’s publicist must be busting the crap out of the Meadows Clinic fax machine given the frequency of statements that come out from the USD36,000 a month luxury rehab where Weinstein –and Kevin Spacey – have been holed up since things started to get very complicated for them). Mostly sorry are the movie producers (Weinstein) and directors (Tarantino), but also many actresses are sorry (for having acted in Woody Allen films), as is Katy Perry for singing a song about kissing a girl that trivialised queer sexuality in a condescending way.

Those hiding from public confrontation slaughter in the plush resorts – a luxury accessible only to those in possession of obscene amounts of money and privilege –  may or may not have grasped  the magnitude of the #metoo campaign whilst they’ve been engaged in “expressive arts” (an activity for the guests as described on the website) and how in many ways the world will not be the same again. They’ll face their trials once they return to the mortal world, but the art they created or facilitated will remain.

Which brings me to the trickier part of this exercise: are we still OK to enjoy the films produced and directed by Weinstein, Tarantino, Allen? I am asking this because there are people who, partly motivated by the #metoo, not only are boycotting films by the aforementioned, but also have started to demand that some museums (notably in New York) should remove sexist artworks. What do we talk about when we talk about art?

The Guerrilla Girls want to expose the gender and ethnic bias of the art world, where women artists are still grossly underrepresented. Despite being a feminist movement, they are not exactly calling for censoringmuseums (to my knowledge). I cannot find good arguments to support the idea of stripping down historical artworks just because they no longer represent the world as we consider appropriate – and actually, it’s irrelevant whether the works are historical or not,  because isn’t art, well, art?

I wonder if the analogy works the other way round, too: is a movie a direct representation of the producer? Admittedly, in the case of Weinstein-films we cannot exactly  say “no women were harmed during the filming of this movie”, because many were. But given how many of these women participated in celebrating these films, wanting people to see these films because it would make them superstar celebrities, and what fantastic successes so many of these movies were – now that the producer has been busted, have his previously applauded films become nuclear waste, too?

I’m aware that my above analogy is probably very patchy. Also we can argue what the purpose of art is, and should be. But shouldn’t us feminists be boycotting almost everything, if we were to use the benchmark of a sexist/rapist asshole being the CEO/owner/producer/director? Criminals belong in jail and sexism cannot be tolerated, this is clear. But surely this doesn’t mean we have to start censoring the society by erasing parts of our history and culture?

Maybe the world of arts is one of the last bastions where the male dominance has been almost absolute until very recently –  business and politics have long been subject to demands for female quotas, for example (although if anything, #metoo has highlighted that sexism is an issue everywhere, also in business and politics, not just in Hollywood movie business). Consider how many women writers had to use male pseudonyms to get published not that long ago, despite literature having been one of the first, few acceptable art forms for women.

Hildegard von Bingen (1098-1179) was one of the first Western women composers, followed by a great many others throughout centuries, but their works/existence never made it to our music textbooks (yes, I googled her – I wasn’t aware of her existence, either). Thus it has been easy to think there are no women in arts.

While it might not be necessary to strip the museums from pictures of naked women, we should demand more attention to be paid to more equal representation of artists – whether in music, visual arts, or indeed, in film industry. In this spirit, I shall be keeping my fingers crossed for the only woman director nominated for an Oscar for best director this year, the great Greta Gerwig, for ​Lady Bird  (also nominated for best film, best lead actress, best supporting actress and best original screenplay).