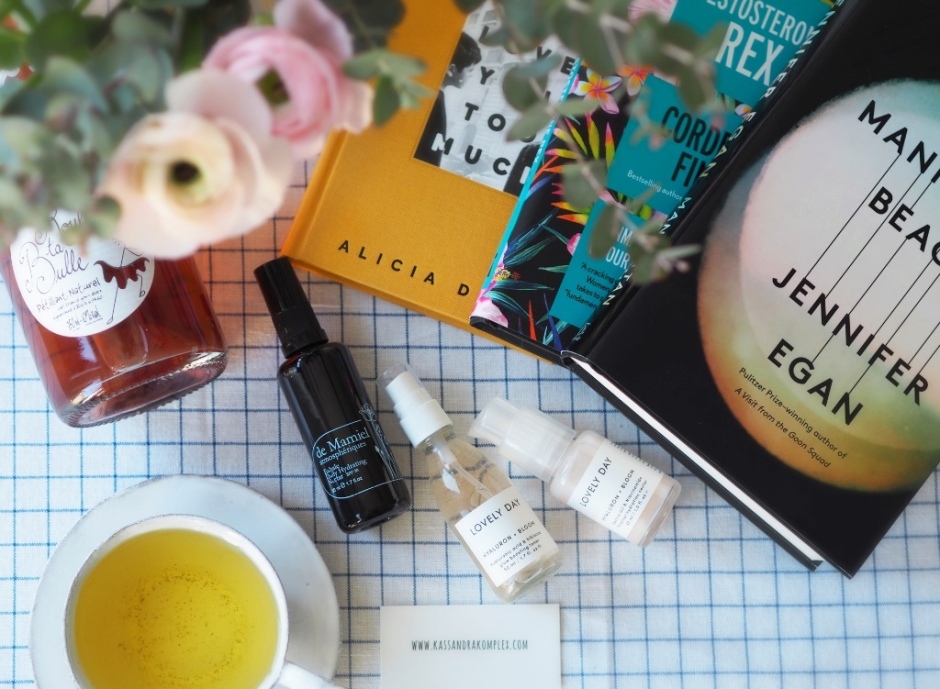 It is March in a few days and spring is officially here. It doesn’t feel like it, though. The Siberian winds have been bringing tough love from the East for a few weeks and it’s still well below freezing point in Brussels (made exponentially worse by the manic wind). This is not acceptable, but the sun is back. The sun! Therefore it is time to get your March bottles ready. Here are mine:

There’s no way around this one. I put SPF on my face every morning. It’s not a vanity thing. I don’t tan and rather look like I live in a coffin around the year, but even if you are more used to the sun, I’d still recommend you put some SPF on. My favourite for winter/early spring is de Mamiel’s Daily Hydrating Nectar that has SPF 30. It is a bit on the spendy side, I admit, but on a good day I can skip any other foundation as this one is tinted. So it’s a bit like a BB-cream, and while I don’t much like the multi-purpose products that claim to do everything, this one is the rare exception.

de Mamiel is an UK-brand and available via webshops such as Cult Beauty. The lucky ones who live in Brussels can get theirs from the nicest beauty newcomer in town, LabelChic on Rue Antoine Dansaert.

I came across Berlin-based Lovely Day Botanicals somewhere in the depths of the internet, and ordered a kit straight away, as it’s not yet available in Belgium. Their webshop works immaculately with German efficiency and the juice is good! Lovely Day is reasonably priced, ranging between 18-50 euros. Lots of hyaluronic acid, which I was kind of on the lookout for. All products are natural. The webshop has trial sizes of all products so that you can try them first/take with you on holidays etc (This is a genius idea, btw. Please all other brands take note.). I have been very happy with their toner and serum, both loaded with hyaluron.

Despite the product design being suspiciously millennial (can we get over pink at some point and move to other colours of this world?) and instagrammable (minimalist labels that look good next to the ubiquitous Byredo -candle and every other product that has identical minimalist black font on a minimalist white label stuck onto it) the contents actually are very good, and that is the main thing.

It’s time to slowly switch to rosé-wines. I thought last autumn that I could keep sticking to rosé around the year as my thing, but turned out my body didn’t agree and suggested in October that I absolutely need to switch to red for the winter months. Which I did, but it’s time rosé makes a comeback in March. Pictured one of my favourite, Roule ta Bulle, which is slightly sparkling, organic, salmon-pink and fabulous with crisps and Hadley Freeman’s columns, such as I’m sick of ‘Poor Jen’ sexism on repeat. This is The One Where Aniston Was Just Fine.

Manhattan Beach by Jennifer Egan. If you’re into New York during the Great Depression, divers, gangsters and workers’ unions, this is your thing. Even if you’re not into the aforementioned, Manhattan Beach might still be your thing, because it’s beautifully written and the subtext is much more than what went on at the Brooklyn Naval Yard in the 40s.

I Love You Too Much by Alicia Drake. I mainly bought it because the beautiful book caught my eye (textile cover, great design) and also because it’s set in the posh part of Paris, in the sixth arrondissement (which also happens to be my favourite part of Paris, ​”Je suis rive gauche! Uniquement!”). The book is Drake’s debut novel and a coming of age -story about an unloved teenage boy who witnesses the inevitable disaster that awaits when money and privilege become more important than your relationships.

Testosterone Rex by psychologist Cordelia Fine is a neuroscience-, evolutionary science and psychology-backed critique against the age-old “Men are from Mars, Women from Venus” – hypothesis. The book is a bit on the geeky side, but I enjoyed her take on evolution and science, shooting down assumptions we have become to regard as facts.  Fine is also the author of Delusions of Gender.

Actually, a totally random but weirdly fitting pairing with Testosterone Rex was Animals Strike Curious Poses by Elena Passarello that I happened to be reading in parallel. It’s an essay collection of absolutely hilarious animal-themed texts, among them story about Mozart’s musical bird.