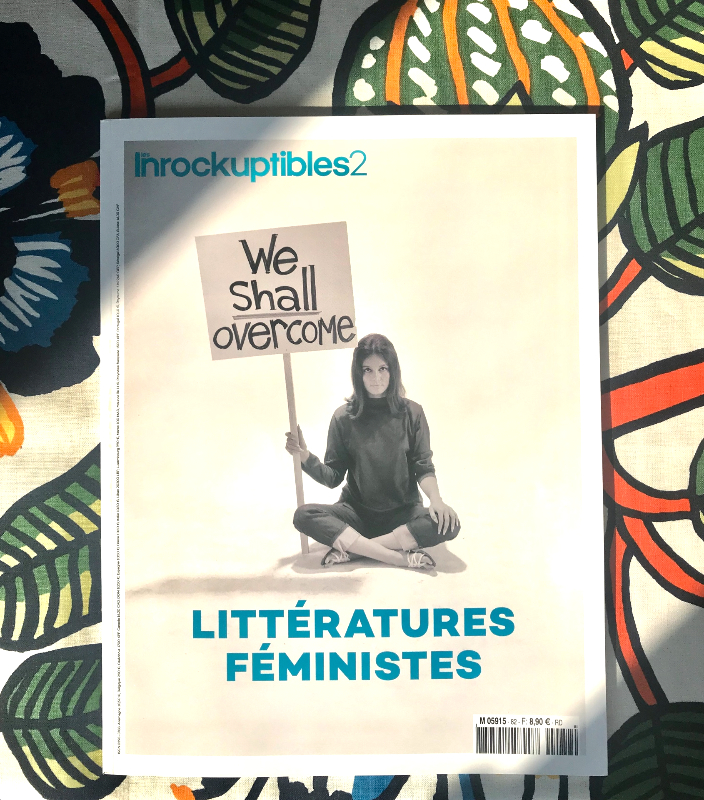 I came across a fantastic magazine the other day: a special edition “Littératures Féministes” by Les Inrockuptibles. It’s a French publication and this second edition is entirely dedicated to feminist writers from around the world. Genial!

We are talking about 98 pages of introductions to feminists who have made an impact. Because I believe you must read some of that stuff, let me give you a curated list of the about 100 of them – if you live anywhere that sell Les Inrockuptibles, I recommend of course getting the magazine, as it’s quite a catalogue of everything essential in one publication.

The editorial finishes with “…nous avons voulu rappeler que les mots sont la meilleure des armes pour lutter contre le silence ou les narrations imposées. Il nous faut les lire, les dire, les écrire.” (we wanted to remind you that words remain the best weapon in the fight against silence and narratives imposed on us. We must read them, say them and write them). So take a look and make it your mission to read one feminist text this summer.

No need to go gung-ho with the Second Sex in this heat – The Woman Destroyed is a good starter novel to de Beauvoir.

The American-Haitian feminist is an entertaining writer. Bad Feminist is a classic. Difficult Women is not bad, either.

Ain’t I a Woman? Black Women and Feminism and Feminist Theory: From Margin to Centre are the classics. bell hooks is a fierce critic of the marginalisation and exclusion of black women from “white mainstream feminism”.

The 60s feminist champion who was scorned by many (feminist women) for her good looks and many lovers which, in the eyes of many, did not make her a credible feminist (she’s famous for doing an undercover story about the Playboy Mansion by infiltrating the mansion as a Bunny Girl). I’ve only read one book by her, which is My Life on the Road – a roadtrip- account of her years travelling the world and fighting the patriarchy.

Obviously. I’ve had a very Virginia-summer this year as I visited a major Bloomsbury Group -exhibition in Sweden and re-read some of Woolf ahed of the visit. Mrs Dalloway works well in the summer.

Virginia Woolf was a big fan. Austen’s bibliography is well-known, my favourite is Emma.

We should all be Feminists. It’s a short manifesto that you’ll read while waiting for the bus.

My favourites by Colette are Chéri and Gigi and the Cat. Perfect reading for summer.

Founder of the first centre for feminist studies at University of Paris VIII, Cixous is well known for her article “The Laugh of the Medusa” from the 70s, which I have not read, and which goes on my reading list. Cixous’ bibliography is impressive (also adds to my reading list).

I have not read anything by her, but was intrigued by the book “​Olympe de Gouges: Des Droits de la Femme à la Guillotine” by Olivier Blanc). de Gouges wrote a declaration for women’s rights in 1791, and specifically fought for women’s right to divorce (granted in France in 1792) and for the abolishment of slavery in the French colonies. de Gouges was ordered to be arrested in July 1793 and was executed by guillotine later that year. Her last words: “​Enfants de la Patrie, nous vengerez ma mort!” (“Children of the Fatherland, you will avenge my death!”)

Jane Eyre by Charlotte Brontë is a favourite.

Didn’t think Frankenstein was a feminist novel? Probably not so much the story, but the writing of it. Post-publication the glory was frequently given to Shelley’s husband, poet Percy Shelley, because it was just so obvious that a woman would never be able to put together such visionary horror-story with her own two hands.

Oksanen’s novel Purge from 2003 tells the story of resistance, rape and sexual slavery against the backdrop of Soviet occupation of Estonia. It is raw, beautiful and astonishing. Oksanen is a Finn with close ties to Estonia (her mother is Estonian) and the book was a huge hit internationally. While the Purge itself is not goth, I wanted to include in this category purely based on Oksanen’s distinct gothic looks (shallow of me, I know).

She has such a vast bibliography of fabulous books that it is impossible to point out one or two – I wrote about Oates earlier with some tips about my favourites. Oates has a distinct style, which often has gothic vibes to it and her texts are always an examination of the American psyche one way or another.

Perkins Gilman’s “The Yellow Wallpaper” is only about 20 pages long, but a very powerful and intense essay about woman driven to madness. Continues the Jane Eyre -streak of a “madwoman in the attic” (Bertha), which was much trending in literature in the 19th century.

​Elfriede Jelinek was awarded the Nobel Prize for literature in 2004. She’s from Austria and her books are great. A good starter kit includes the Klavierspielerin, Gier and Bambiland.

Another Nobel laureate. The Golden Notebook is a classic. I also like The Grass is Singing a lot.

I would like to be the person who reads Maya Angelou, but alas I’m not. Possibly because I have issues with reading poetry. Angelou has written other things as well, though, so I might give her “I Know Why the Caged Bird Sings”  a go. Eventually.

It’s interesting that Les Inrockuptibles decided to include Didion as a feminist writer, as she as much as denounced feminism in her earlier oeuvre. However she’s one of the clearest voices as far as US societal criticism is concerned, so I am convinced she’s earned her slot in the magazine. Read anything by her, I love her distinct (and much imitated) style.

Feminist, novelist, essayist and a human rights activist. I enjoyed reading the “Susan Sontag – the Complete Rolling Stones Interview” that has come out as a book.

Her “I love Dick” was considered a game-changer in American autobiographical fiction in the 90s and made her into a huge star (she had been directing films long before as well). I was not massively convinced about the book. Kraus’ latest book is a biography After Kathy Acker. Acker was an American punk, poet, novelist and feminist writer.

OK that became quite a list. All of the above writers and many others are introduced in the Les Inrockuptibles. I hope you found something that you want to give a go at. If not, at least revel in the joy that any magazine dedicates 98 pages to introduce fantastic women writers from around le monde!

One thought on “Feminist Writing Hall of Fame”