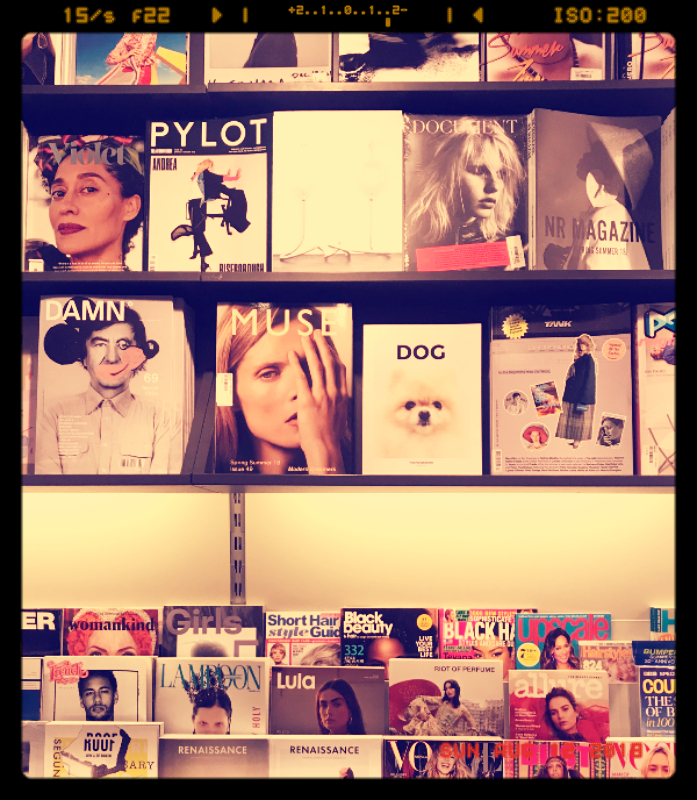 Move over final sales, 70% off everything, ​liquidation totale! September issues are here and the new season is upon us! I’ve pre-read a pile of  magazines this weekend for you, with the exception of US Vogue, whose arrival us Europeans must wait for until September because I don’t know why. Anyway, after thousands of pages of plum tweed and people with elaborate flower arrangements on their heads, herewith my August Fashion Press Review:

There’s no escaping the big facial hair debate of this autumn: Rihanna didn’t have eyebrows on the cover of UK Vogue. I’m seeing a pendulum swing back from the bushy situations of the recent years. I’m also essentially seeing an artistic take of a singer for a fashion magazine cover, but apparently it’s bigger than that. So am just giving you the heads up: be prepared to have an opinion.

UK Vogue dedicates 8 pages for Princesses Eugenie and Beatrice of York to open up about their lives and model clothes worth some 17 000€ (some garments are “to order”, so all prices are not disclosed). The princesses don’t have official royal duties to speak of (something their father is allegedly upset about because it means they are not eligible to get augmented funds from the royal purse taxpayers’ purses), but Eugenie is getting married this October, therefore the interview.

While it possibly is Vogue-worthy to announce that 28- and 30- year old women have jobs in 2018, there’s something endearing about them going on about how “real. Like very real” they are, at the same time admitting that they have “very understanding bosses” at work, which is just as well, given that Beatrice has a job in New York, but only lives there half of the time.

I don’t have strong feelings about royals, really I don’t, but them playing down royal privileges in interviews (“We’re just so overwhelmed and reeling off our patron roles to banish modern slavery and single-use plastics, because we are just like you, you know, at the end of the day!”) just makes me, um, turn the page.

Moving on to Harper’s Bazaar: There’s an interesting article about the Swans, Truman Capote’s gang of beautiful and privileged women (Dolores Guinness, Lee Radziwill, Jackie O, Marella Agnelli) in the 60s. I am currently reading the book “Swan Song” by Kelleigh Greenberg-Jepchott, which is fabulously entertaining and perfect escapism. Am halfway through, and if you’re into reading about the bold and the beautiful of the bygone decades, this might be something you want to give a go at.

Beauty insiders share their best tricks of the trade in Harper’s. In addition to sprinkles (filler, a bit of Botox but only by people who understand  the word subtle: “no-one ever spots my twice-yearly top-ups”) they seem to be big on ​gua sha, which is a massage performed by a sliver of jade called such. I tried a gua sha facial in Brussels recently and it was lovely.

I reckon the secret is to learn to use the thing and then use it every day. According to The Times fashion director it can “melt away frown lines“, which is a very bold statement. I have been ruminating the purchase of a gua sha (many brands do them), and while I’m all for increasing my lymphatic flow, I fear I’ll never actually get down to doing the required massage (exhibit 1: Short-lived oil-pulling habit).

I know. I’ve mentioned her in about every single post this summer, but she’s massively en vogue! Harper’s has an article about a new exhibition, inspired by Woolf’s Orlando, a historical novel with a queer-twist which at the time caused commotion mainly due to Woolf’s relationship with Vita Sackville-West, and can thus also be read as lovers’ biography.

Williams is Vanity Fair’s cover girl in the September style-issue and I love her hair. Also her interview is good. She seems to have her head firmly between her shoulders for someone whose day job is mainly dealing with unstable narcissists. I loved her as Marilyn Monroe in My Week with Marilyn, but I am mainly in love with her fantastic short hair.

And then there was some fashun as well. What can I say: it’s a miracle how every August moss green, tartan and cabled knits photographed in  the Scottish highlands manage to look fresh.

Street is not going anywhere, every brand wants to be street. I walked past Brussels Chanel shop the other day, and they had put a very street-y outfit in the window: an Arran-knit, jeans and a lovely burgundy sac à Rabat. Jeans were your bog-standard sand-washed deal with a sliver of Chanel tweed on the seams. Yours for 1420€. Even the slightly stuffy jewelry-maker Tiffany’s had graffiti-artists painted on their window displays, and the jewellery on display was from their street-collection, which has been modelled by cool people like Zoë Kravitz.

What else? Burberry have renewed their logo.

This was actually the one big trend that was visible when going through the magazines. Most big magazines have chosen non-Caucasian models for their September covers. There’s also much more diversity in the individual fashion shoots and stories between the covers. There are more interviews and pictures as well as beauty tips to cater for a more diverse readership. This is is much welcome development that hopefully is not just a coordinated September action “because momentum”.