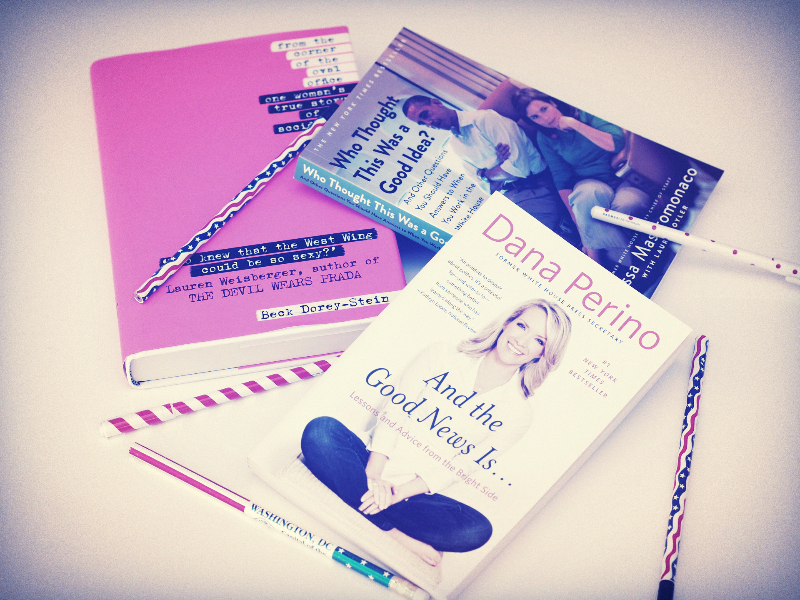 Ever wondered why there hasn’t been a European Union version of the West Wing? This is why:

Director: So who do we have to play the Press Secretary? Like CJ in the West Wing?

Casting director: We would need three. At least.

Casting director: Er, no, but now that you mention them, yes, for the Parliament and…

Casting director: Um, yes, actually you’re right, add that to your list, but then we need another for the…

The EU does not work for drama, which is a shame because there’s plenty of it. The White House, in contrary, is a logistical no-brainer, full of intrigue and we love it (exhibit: The House of Cards). Therefore it’s no wonder that so many ex- White House staffers have published their memoirs. I have not read the oeuvre related to the current administration because I cannot, but did read three books by women who worked close to former US Presidents.

Before presenting the books, a few general remarks:

– Men never reveal how starstruck and beyond themselves they are when they work for princes or presidents. There’s none of the “I couldn’t believe this was now my life” or “I’d lay in bed in the evening and cry happy tears while wondering how little ol’ me ended up flying with Air Force One” that frequently come up in female staffers’ memoirs. With men it’s more like “I was born to rule”. Also the men don’t really work for the president. They work with the president.

– Political memoirs rarely make for good literature. At best the text is well written and edited, it’s not all me-me-me and there are some actual insights (this is always promised on the back cover, but there are rarely any real insights). Surely memoirs are a category of their own and not to be compared with literary fiction, but it really is a rare skill to write a decent, interesting memoir if you are not a former politician (and even if, ahem, you are). Basically you’d have to have worked in the White House with enough access to POTUS in order to have any clout outside Washington D.C. and/or your immediate family and circle of friends.

– The threshold to write memoirs seems to be whole lot lower for men than it is for women. It would be interesting to know what role demand and supply play. Especially male journalists are terribly keen on sharing their experiences in literary form.

– Memoirs by politicians, journalists or staffers are an acquired taste and only interesting for those who come across these species in their daily lives. One must be able to relate to the protagonist, otherwise there’s no point. Therefore it has been a delight to see some new memoirs pop up by women who have spent their youths running on the corridors of power. I have been holed up in a military base in the middle of Bosnia and Herzegovina while the mother of all periods suddenly attacked and there was no change of clothes and/or access to sanitary pads/tampons  and/or painkillers anywhere near anything until the talks finished and the cars whisked everybody back to the hotel and since you’re a curious lot: the talks did drag on. A lot. So yes, while reading about somebody else’s menstrual cramps while on a work trip does not exactly alleviate any situations in the real life, it still is comforting to know you’re not quite alone in this world in these situations.

​Who Thought This Was a Good Idea? by Alyssa Mastromonaco

Mastromonaco was Obama’s deputy Chief of Staff and the memoir is her open account of what your life becomes when you work so close to POTUS (spoiler: you will have absolutely no life). The book is intended for younger audience which gives it a nice older sisterly touch. Mastromonaco is candid about her contemplations also with non-work related issues, such as starting a family, problems with conceiving and what it feels like to leave an experience like that behind: When I left the White House, I was so worried: that I would never be successful on my own, that I had given up the one thing that made me who I was. (…) Although I have no idea what will happen next, I do know that it would be denial of everything I learned working for Barack Obama to give up or opt out. Politics will always be a twinkle in my eye – the thing that makes me say “What if?”

(Note: Relinquishing power is often as painful for the staffers as it is for the actual politicians. Sometimes even more so.

And the Good News Is…  by Dana Perino

Perino was the White House Press Secretary for George W. Bush and the first Republican woman to work in such position. It’s funny to read her write about how she dealt with all the criticism that poured on her at the time (she covered 9/11) – how times have changed… I found Perino’s book an easy-read for policy-nerds. She devotes one paragraph for explaining why she’s a conservative, and has a 10-page Q & A in the end to reply to readers’ questions. This is how she describes the reception held to the outgoing and incoming staffers in the White House the day Obama took office:

“Again that day I learned the lesson to which I have constantly returned – that projecting my own anxieties onto what others will think of me is always much more negative than reality. The good news is that people aren’t necessarily as partisan as you might think they are. For an event I really didn’t want to go, it sure holds a spot as one of the most memorable days of my life. And I will always appreciate the civility shown to the entire Bush team that day.”

​From the Corner of the Oval Office by Beck Dorey-Stein

This nicely brings me to the description by Dorey-Stein, an Obama-stenographer, of the Obama/Trump -changeover in the White House:

“I watch the Napoleonic clowns swagger through the West Wing in bad suits. I watch the female contortionists, who believe bending over in a miniskirt and stilettos is a good idea but a woman’s right to choose isn’t. I watch Stephen Miller smirk like a demonic Pee-wee Herman as he cracks jokes about gender equality in a van full of women who are active-duty members of the military. I watch all of it. I force myself to look up so that I can write it all down.”

I liked Dorey-Stein’s White House diary. She was 26 years when she started her White House career so the book is also kind of her coming of age -story. It’s a bit like nerdy versions of “The Devil Wears Prada” and “Sex And the City” got a baby, but it’s actually also quite addictive and the writing does not make you squirm. And there’s lots of dish. Lots. Affairs with colleagues, surviving on pills and alcohol, “ensuring that POTUS looked good wherever he went, all the rest of us looked increasingly like shit” (again: no life outside work).

And who knew – there’s a movie in the making!

I hope to see the day when there’s a movie made about one of the European Commission transcribers.