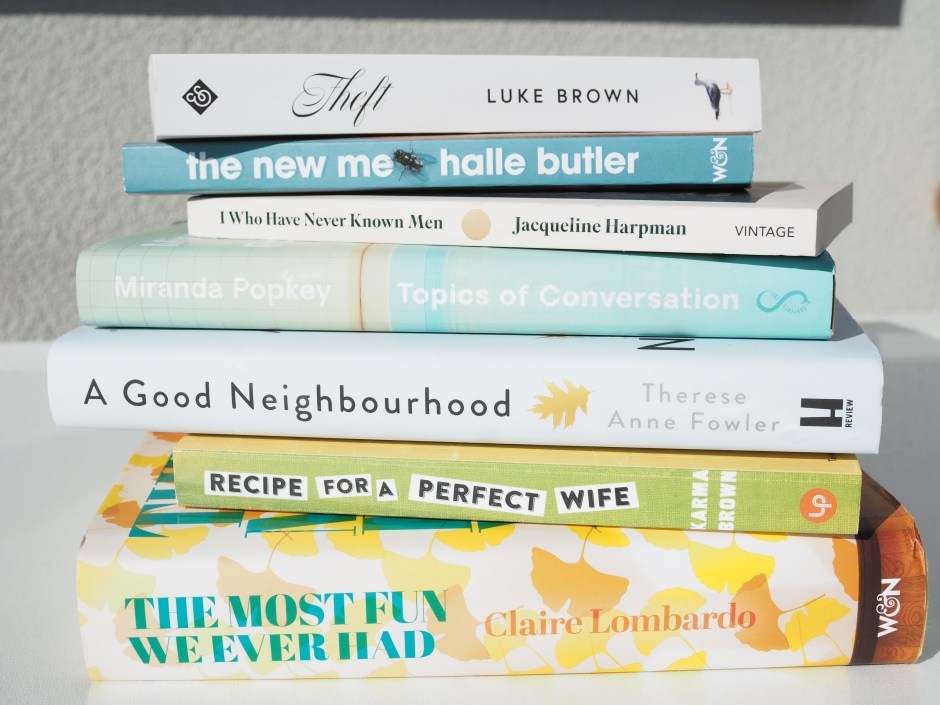 I can be a finicky book-byer, and usually do not buy fiction online. Exceptional times, exceptional measures. I made two pacts with myself in the beginning of the lockdown: 1. No drinking wine alone. (Zoom hangovers, anyone?) 2. Netflix only when I have exhausted all other entertainment in the world. (I know myself, and I have no self-restraint and/or -discipline.)

I do have an (in)decent amount of books at home at all times, but sometimes a girl wants to spice things up. So I ventured to Amazon and got a stack of some of the latest. It’s admittedly a very indie millennial pile, come to think of it, but for what I have finished by now, some of it is actually entertaining.

Luke Brown’s Theft is so far my favourite of those that I have finished. Based largely in London in 2016, it’s about the various definitions of success (fame, wealth, happiness, health) and the socio-economic classes in the UK. It’s written post-Brexit, but set in the UK during the last months of campaigning. (Remember Brexit? Those were the days.)
One of the cover blurbs describes Theft as “biting but elegiac snapshot of early 21st century life in which the unceasing prospect of catastrophe is the new normal”.
I’ll say.

I might have outgrown (biologically) The New Me main narrative, which is about a thirty-year old “eternal temp” working odd jobs in the city and trying to figure out whether a permanent job will ever be her jam. But but, Butler’s style is very firework-y and funny, and this books is a nice little palate-cleansing snack for your quarantine.

The book I am absolutely dying to read is actually not millennial nor new. I Who Have Never Known Men was originally published in French in 1995. The author Jacqueline Harpman is Belgian, from Etterbeek, and her family fled to Casablanca when the Nazis invaded Belgium. Harpman qualified as psychoanalyst after her return, and wrote over 15 novels and won numerous literary prizes.

I Who Have Never Known Men is female-led scifi, or a Handmaid’s Tale -type of post-apocalypse dystopia. 40 women are held in an underground bunker, where they have been held captive for years. They are controlled by male guards, and one day manage to break free. As they make their way in the surroundings, it soon dawns on them that they might be the last people left on this planet. At first look it seems to have some similarities with the feminist classic Herland by Charlotte Perkins Gilman.

There is a particularly timely quote on the back cover that also gave me the chills:

For a very long time, the days went by, each just like the day before. Then I began to think, and everything changed.

The Good Neighbourhood came up as a random Amazon recommendation, and I decided to take a chance, given that I have read Fowler’s previous books A Well-Behaved Woman and Z: A Novel of Zelda Fitzgerald. Good Neighbourhood is said to center around a neighbourhood romance that becomes entangled with class, race and traditional expectations.

Topics of Conversation seems to be rather a study about female sexuality and friendship, and, according to the back cover “a book that repeatedly asks how women can fully trust their own desires when they’ve grown up steeped in the wrong stories“. In other words, as my friend would put it, a book where nothing happens. Also: the kind of book I absolutely love – a protagonist with very likely more issues than me.

I finished Recipe for a Perfect Wife today and was a bit meh. It’s a nice, well told story, but a bit obvious, a bit calculated, very predictable and a slightly naive, maybe.

The Most Fun We Ever Had seems like the most unlikeliest pick for me, it’s some sort of a modern epoch of a Sorensen family and I am not quite sure why I added it in my shopping basket, but here we are, 550 pages to distract me from whatever fresh hell each new morning brings these days.

I am not sure it is wise to surrender completely to random literary picks, especially during testing times like these, so I make sure to be reading my old favourites at any given time as well. In the next days I will rehash some of older posts here with personal literary staples that have taken me through thick and thin.

One thought on “Latest Lockdown Literature”