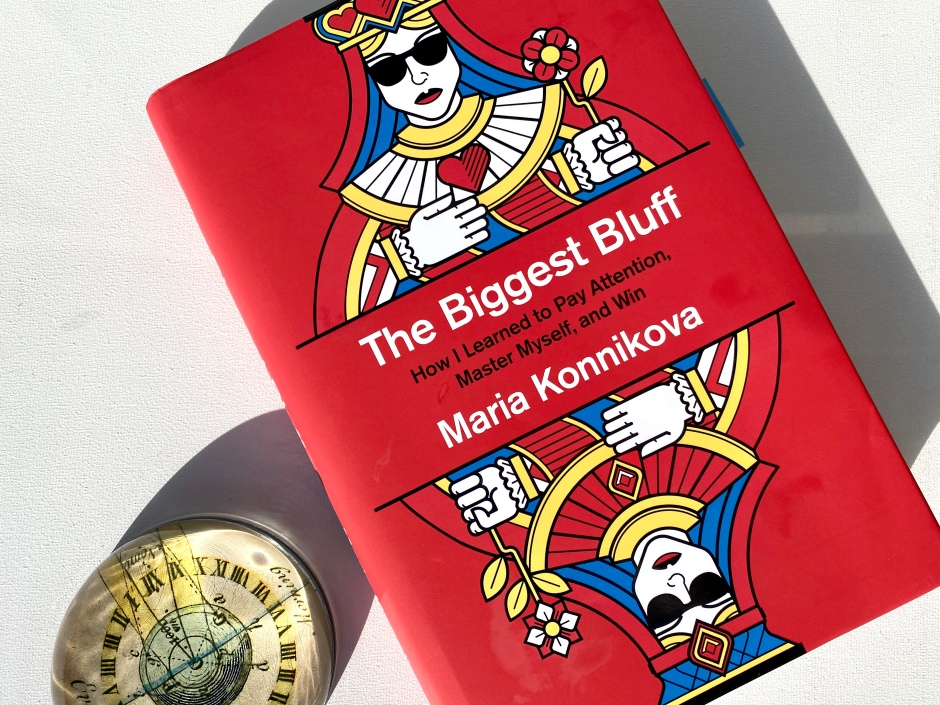 Everyone has a plan until they get punched in the mouth.*

I am no stranger to the self-help aisle. The lockdown-boredom made it possible to pass the time listening to various podcasts in which life advise was abundant. I like advise, especially if it’s good. It’s just that the market for handing out life advise is largely dominated by a very specific socio-economic segment (American WASPs, with the notable exception of Oprah), whose advise often ranges from what? (repeat “I’m a badass” aloud in your home daily!) to um, what?? (You’re a super-attractor!)
The Queen of such veritable BS is Louise Hay, whose daily affirmations mainly make me lose the will to live, full stop. Things like “Life supports me in every possible way“.
(Which admittedly comes with a legally solid disclaimer “possible”. “Sorry it was not possible to support you this time, thank you for your understanding. Best, Life“.)

Then I read that there’s a Russian (-American) Maria Konnikova on the market, and the reviews about her book The Biggest Bluff got me very interested in her thoughts about tackling life. When the book finally arrived, I read it in one sitting. So should you. Make it the one self help you read this summer. Or year.

The Biggest Bluff is psychologist Konnikova’s journey to the world of poker (as a total beginner) in her quest to figuring out what can be controlled and what can’t, following a stretch of personal bad luck. The book is not from rags to riches -story: Harvard-educated Konnikova left her job at the New Yorker to immerse herself in poker and to write a book about it (she’s written several books before). She did win rather handsomely at international poker tournaments, but that’s also not the point of the book.

Man plans, God laughs, is one of the book’s central messages. We can think ourselves being in control as much as we want, but in the end we are playing by the rules of chance. Same with luck.

“Nothing is all skill. Ever. Because life is life, luck will always be a factor in anything we might do or undertake. Skill can open up new vistas, new choices, allow us to see the chance that others less skilled than us, less observant or less keen, may miss – but should chance go against us, all our skill can do is mitigate the damage. And the biggest bluff of all? That skill can ever be enough.”

But The Biggest Bluff would be a depressing (if Russian) self-help, if it didn’t offer some hints as how to deal with a bad hand. See, the best players don’t need pocket aces to win. Below some of the soundbites I highlighted as I was reading it.
(The book is about learning to play poker, yes, but it’s not a gaming instruction manual. I had no knowledge and/or interest in poker whatsoever, but still found the book immensely interesting and the life lessons 100% on the money.)

Have a strategy, and be prepared to change it.
You can’t just plow ahead with one strategy because it worked in the past or someone else employs it successfully. Each time you act, you have to reassess based on what is now known versus what was known before.
Sometimes, it’s the hands you don’t play that win you the title. The art of letting go can be the truly strong one. Acknowledging when the landscape has shifted and you need to make a shift yourself as a result.
Sometimes, the most difficult thing of all is to stop playing. All too often, we stay in a hand long after we should have gotten out. No matter how good your starting hand, you have to be willing to read the signs to let it go.

Fail.
You will never learn how to play good poker if you get lucky – it’s as simple as that. Everyone has a plan until you get punched in the mouth.
The benefit of failure is an objectivity that success simply can’t offer. If you win right away, you’ll have absolutely no way to gauge if you’re just really that brilliant or it was a total fluke and you got incredibly lucky.

Pay attention.
Where observation is concerned, chance favours only the prepared mind. Prepare and and work hard, but if you’re not observing well, observing to begin with, no amount of preparation is enough. The one is largely useless without the other.
We can’t control the variance. We can’t control what happens. But we can control our attention and how we choose to deploy it.

Did you know that the most successful hunter in the animal kingdom is the dragonfly?
(Captures 95% of its targeted prey, compared to cheetah’s 58%)
Its brain has evolved not only to see possible targets but predict their future movements with startling accuracy. The dragonfly is so good not only because it sees what its prey is doing, but because it can also predict what it will do and plan its response accordingly.
It does not announce its presence with a roar. It just watches quietly – and then changes its hunting approach based on what it’s observed in its prey.

Keep a poker face.
You can’t play scared. You have to play smart. Turn any decision momentum so that the power of decision is on your side. Do nothing without first gauging your opponent’s reaction. Reveal nothing about the strength of your hand until you have to.

Focus on the process, not the luck.
You know about the randomness about life but it doesn’t help to think about it. There is no such thing as objective reality. Every experience we interpret for ourselves. Therefore words and framing matter.
Got shit cards? No-one knows that. If your face reads card dead, everyone will walk all over you as you meekly fold. If you decide to take the opportunity to cultivate a conservative image and then make a well-timed move, suddenly you have the upper hand. The best players don’t need pocket aces to win. Everything is in how you perceive it.
Bad beats drag you down. They focus your mind on something you can’t control – the cards – rather than something you can, the decision.

Go for the win.
Wanting the cash is not the same as wanting the win. “The people who cash most are actually losing players. You can’t be a winning player by min cashing (cashing the minimum amount of prize money awarded in a tournament). It’s just not possible. Good players are going to realize if the min cash is important to you, and they’re going to take advantage of that. They’ll really abuse you.”
If you’re never caught in a bluff, you’re not bluffing enough.

Too often, we settle for the minor tokens that mark our accomplishment – the participation trophy rather than that podium finish – and let them make us feel that just fine is good enough. And sometimes, maybe it is.

Ditch the amulets.
Superstition is inviting the chaos. It’s opening you up to the very elements poker is meant to control. Acquiescence is not harmless. Because the moment you acquiesce, you give up a bit of control, however tiny, to the process of superstition. And if you actually believe in it, you become a gambler in the real sense of the word, ready to gamble with fate in a way that is the very antithesis of everything poker has taught me about approaching life.

All bullet points above are citations from Konnikova’s The Biggest bluff: How I Learned to Pay Attention, Master Myself, and Win. They seem quite banal and random listed like that, taken out of their context that is over 300 pages of superbly researched text. She takes the reader on a poker-tour around the world, Monte Carlo, Macau, the Bahamas – and of course Las Vegas, where she is given tournament advise from a Finnish superstar poker-player Patrik Antonius “an absolute beast on the live scene for the last 15 years”.
(This makes much sense. Finns should be very good at poker, given that we are born with a poker face and never learn to express emotions.)
I do like the book’s undercurrent messaging, which, loosely interpreted, is something like “life’s not fair and crystals do not have healing powers”. Or, chance is just chance: it is neither good nor bad nor personal. Without us to supply meaning, it’s simple noise.