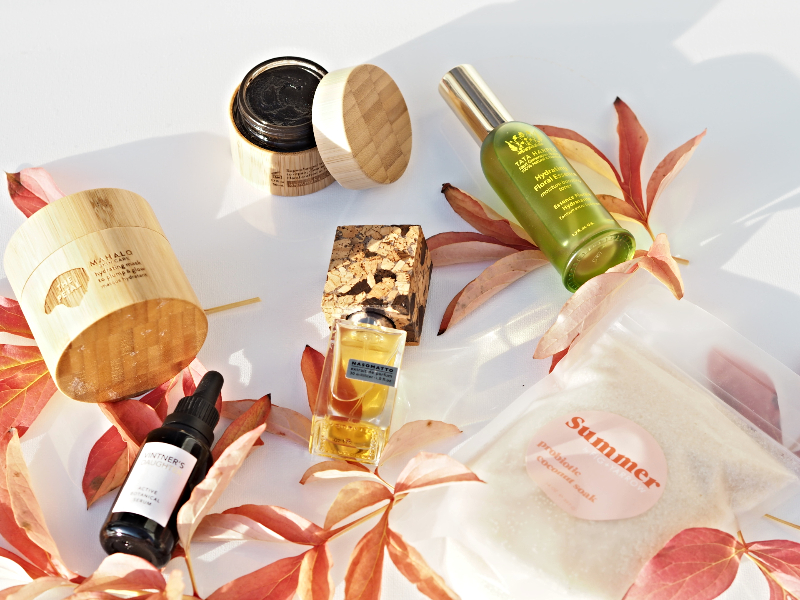 In case people decided to ignore the IPCC climate report last week, some weird stuff is taking place in real life as if to make sure the message hits home also chez deniers: it was +26 celsius and clear skies in Brussels today. Just sayin. Not normal.

While it does not feel like autumn yet, I have been slowly preparing my skin in case it hits overnight. Herewith some current favourites:

My skin feels parched after the very hot and sunny summer. If I am to believe the skincare gurus of The Porter Magazine, facial toners are making a bit of a comeback. Some people say toners are just overpriced scented water, but apparently there is some point to using toners as an additional hydrating layer. I was hunting for Josh Rosebrook’s Hydration Accelerator last week, but it was (unsurprisingly) sold out. Do stock up if you get your hands on it – it is an extremely nice product. I settled for Tata Harper’s Hydrating Floral Essence, which is a moisture boosting toner. I spray it on my face after cleansing, before applying serum.

I went back to ​Vintner’s Daughter Active Botanical Serum two weeks ago. It is the only product that the brand makes, and that makes me love the serum even more. Anything to narrow down choices! It’s the ultimate hippie-luxe product and it works. When I say it works, I mean it works to diminish any scars (my face went absolutely berserk this summer because I was using harsh sunscreens) and it does even out the skin tone. Also it’s not greasy, which many other oil serums often are. It is also famous for being on the spendy side. On the other hand (I don’t) need a separate serum with this one. I use Vintner’s Daughter in the evening on a moist skin.

Then masks. A natural skincare guru advised me to double-mask to really plump up things face-wise. I bought The Bean by ​Mahalo to experience such a double-whammy with The Petal that I already had. The latter is a really nice hydrating deal that smells pleasantly of roses and calms down irritated and worked-up skin (I had to photograph it with the lid on because I had it with me on a trip and the airplane pressure resulted the product to look like a pink, rubbery brain in a jar). The Bean is an antioxidant mask that is particularly effective for purifying the skin. The order of business is to first apply The Bean, wash it off after 15-20 minutes and then The Petal (which I could leave on forever because it does not dry and feels soothing and lovely) for another 20 minutes or so.

Ever happened to you that a completely un-you product catches your eye when traveling somewhere new? To the extent that you purchase the said product and look at it in confused horror when finally unpacking your suitcase at home? (This millstone-sized sombrero with little bells sewn onto the rim felt so right in Sao Paulo!) I had this experience in Lisbon lately.

It would appear that I was feeling particularly Iberian when I was sniffing some new perfumes, because I unpacked  Nasomatto’s Baraonda when I was back in Brussels. Nothing wrong with the perfume as such, but it is quite definitely something I would probably not have considered buying in Brussels. This of course is a positive thing, trying out new things outside one’s comfort zone.

I was not familiar with Nasomatto before, but they do niche perfumes and their packaging is sleek and minimalist with a luxurious feel (it was the packaging that caught my eye). Baraonda‘s description on the website is somewhat useless if one is looking for indication of how the juice actually smells like, unless “it magically rejoins the whole and the nothing” has some kind of olfactory meaning I have missed (not excluded). My initial feeling of “this smells like whiskey!” was confirmed after some googling for reviews. It’s not like it is bottled Glenlivet – but the first whiff does remind me of whiskey and then the smell softens into something sweeter (and quite synthetic).

I am not big on baths, and buying Fig + Yarrow’s Probiotic Coconut Soak definitely falls in the category of “getting ready for nuclear winter” together with stocking up toilet paper and canned food just in case. If I don’t manage to run baths this autumn, I can surely keep sniffing the lovely salts instead. Confusingly the salts are called Summer, but I can totally live with that.